Inductors are simple in appearance but behind those seemingly basic designs are multiple iterations of calculations, considerations and trade-off between performance, price and longevity.  That complexity explains why there are so many different offerings of core materials, types of windings, sizes and shapes for a wide range of applications.
An inductor's core is produced from specially formed “soft” magnetic materials that are able to store energy in the form of a magnetic field when current is flowing through the winding that surround it.  Although these core materials are “hard” the cores are referred to as “soft” since they do not retain significant magnetism.  The magnetic core is usually surrounded by carefully placed windings of wire. The combination of core and windings, along with the associated electricity passing through the wire, results in inductance, which is the ability of an inductor to store energy and oppose a change in the electric current flowing through it.

The variety of shapes and combinations provide designers with many different options to achieve the best performance in their required footprint. Choosing the most appropriate shape is influenced by a variety of factors including the allowable mounting footprint and volume, the application, radiation limits, size of windings, operating and maximum temperature, and the mounting configuration.  Some of the most popular core shapes are toroid, rods, E-cores and blocks. Many more complex shapes, and even custom designs are possible.  Micrometals has vast experience in designing and manufacturing custom shapes and even creating custom material formulations that can provide unique performance attributes for challenging applications.
In addition, an inductor's magnetic core can be created from multiple piece stacks or assembled together. Multi piece cores made of the same magnetic material may be required for extremely complex shapes
or larger inductors.  Micrometals can even fabricate cores into mounting plates, rings or other
composite configurations.

Cores should be chosen with an understanding of how windings will be installed. Sometimes, windings are wound directly around the core. Other times, the windings may be wound on a sleeve, or bobbin, which is commonly slipped over a protruding part of the core. Wire used for inductors are usually insulated to prevent adjacent turns from shorting out.

After a basic approach to a core shape is determined based upon footprint and desired performance a series of calculations is carried out to determine how much wire and possible orientation is required to provide the desired electrical effects.  Below is one approach to designing an inductor:

Experienced engineers can quickly move through many of these steps as their experience has provided them with a deeper insight into the relationships and trade-off between different design approaches.  Below are of those insights to consider:

The quality of an inductor is defined as the dimensionless factor Q, which is a ratio of the inductance reactance at a given frequency divided by the combined losses in the inductor.  Lower losses equal higher quality inductors.  Losses present themselves in several forms.

Core losses are a result of an alternating magnetic field in a core material. The loss generated for a given material is a function of operating frequency and total flux swing (∆B).  The core losses are due to hysteresis, eddy current and residual losses in the core material.  These circulating currents produce losses that are proportional to the square of the inducing frequency.

Hysteresis is represented by the enclosed area within a BH curve and results from the energy required to reverse the magnetic domains in the core material. These core losses increase in direct proportion to frequency, since each cycle traverses the hysteresis loop.

DC Resistance also known as DCR or copper loss consists strictly of the DC winding resistance and is determined by the wire size and total length of wire required as well as the specific resistivity of copper.
Skin Effect increases the wire resistance above approximately 50 kHz because the current tends to travel on the surface of a conductor rather than through the cross section. This reduces the current-carrying cross sectional area.

In applications where the total losses are dominated by core loss rather than copper loss, an overall improvement in performance can be achieved by using a lower permeability core material.  This is typically the case in high frequency resonant inductors.

To reduce these eddy current effects Litz wires are typically used.   A Litz wire is a bundle of many thin insulated strands, with a diameter much less than the skin depth. In the Litz bundle, each strand is cyclically transposed from the center to the surface and back to the center so that each strand is periodically located along every place in the cross section of the bundle. This stranding and cyclic transposing reduces the skin and proximity effect and makes the current density more uniform across the cross section, minimizing winding resistance.  One should note that the dc resistance of a Litz wire is higher compared to a solid conductor with equivalent total cross-section. 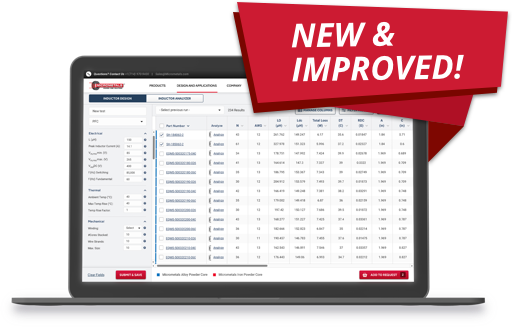 Micrometals Inductor Design Software is an extremely valuable tool to help determine the most suitable core for your application based upon your primary criteria. The Micrometals Inductor Design software will automatically calculate the smallest core size possible that will meet the specified needs and will present calculation results and suggested cores to consider including Micrometals Part Number, Core AL Value, Required Number of Turns, Core Loss, Copper Loss, and Temperature Rise. The wound dimensions and weight of the copper wire can also be displayed. The software allows the design engineer to quickly work up multiple design solutions based on user specified electrical requirements.

An important feature of the software is that predicted changes in core temperature versus time and temperature can be graphically displayed for the designs. This feature will allow the design engineer to see if the design is capable of meeting a minimum life expectancy. The graph will display projected core temperature change out 100,000 hours.

After reviewing and sorting the potential solutions the chosen design can then be moved into our Inductor Analyzer for further optimization of the wire size, windings or other criteria.  User can even compare several different variations side-by-side for easy analysis and optimization.

Micrometals believes the information contained within the software and results generated by the software to be accurate. It is important to note that the default settings can be altered and unacceptable designs generated. Before using this product, the user agrees to determine suitability of the product for their intended use or application. Neither Micrometals Alloy Powder Core Division nor Micrometals Incorporated shall be liable for any loss or damage, including but not limited to incidental or consequential damages as a result of the use of this software

Unit price is an estimate and intended to demonstrate relative prices between materials and sizes and provide design engineer value judgment and is not a procurement offer. Detailed unit pricing and as well as samples for evaluation can be directed to Sales@Micrometals.com
Further application and technical support is available from Micrometals as well assistance on the use of this software, please contact your local representative or Micrometals Anaheim California headquarters at Applications@Micrometals.com
Any feedback on the software would be greatly appreciated, please send comments to Applications@Micrometals.com